Gearboxes are useful components to adjust the torque-speed characteristics of the motor according to the application. In particular, servo motors are fairly high speed compared to the requirements in most applications. In this case, gearboxes allow for more compact and cost-effective solutions by providing a reduction in speed and multiplication of torque which avoids an oversized motor.

A not so well known feature of gearboxes is the intertia adjustment. A high mismatch of load inertia to motor inertia and a not perfectly stiff coupling result in system resonances which cause overshoot or even system instability. This fact is extremly important for open loop steppers (target: reflected load inertia at motor shaft < 4 x motor inertia). The gearbox provides the solution because the reduction of the load inertia is proportional to the square of the gear ratio, but torque and speed behaviour remains linear.

Most of our gearboxes are planetary gearboxes, where the drive input is realised by one central gear (called the "sun") which distributes the input torque to the planetary gears which then drive the annulus, which is a ring with inward facing teeth connected to the output. The ratio between the sun and the planets determines the transformation ratio of the gearbox for speed reduction and torque multiplication at the output. Up to three of these stages can be stacked together into one gearbox. 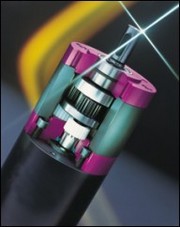 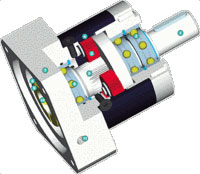 Our gearboxes can be adapted to most motors by using according flanges for easy installation. Please let us know the exact motor part number or send us a motor drawing with your enquiry!

We offer the following gearbox families: